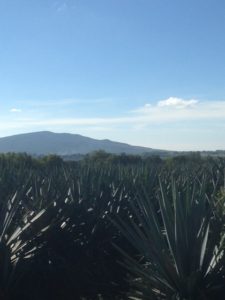 Hola, amigos de Otto’s Wine and Spirits.  You might be thinking, “What’s up with the Spanish greeting?”  A few months ago I was invited to Mexico by the Cazadores Distillery to blend a barrel of tequila which would be bottled for our Otto’s locations.  To say that I jumped at the opportunity would be an understatement.  The thought of sunshine, 84 degree weather, great food, smooth tequila and, the kicker, 4 days without having to hear an election ad, was too good to pass up. 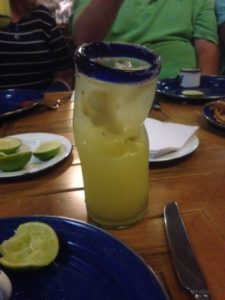 Steve, the manager of our Menomonee Falls location, and I boarded our early morning flight from Milwaukee to Dallas/Fort Worth with a connecting flight to Guadalajara, Mexico.  When our second flight landed, we were greeted by our host, Tania, the Cazadores Brand Ambassador.  Within minutes, we were whisked away like foreign dignitaries in a 16 passenger Mercedes van enroute to La Casa de los Platos for a late lunch.  Not only were we treated to some excellent Mexican cuisine, we were also introduced to “Mexico’s Most Beloved Cocktail,” the Paloma.  This restaurant specialized in making them from scratch in large clay pitchers.  This wonderful drink is a mixture of freshly squeezed limes, grapefruits and oranges, an entire liter of Cazadores Reposado, topped off with squirt soda.  Served in a hand-made clay mug with a salted rim, it was an instant hit.  A second bottle of Cazadores was emptied the old fashioned way, one shot at a time, with several shouts of “Salud!”  (A Mexican toast to health)

We arrived at Hotel Quinta Real where we would be staying for the next three nights.  We weren’t there too long when we found ourselves in the hotel’s restaurant ordering appetizers.  Apparently tequila makes a person very hungry.  We then transitioned to the hotel’s bar for a few cervesas and, of course, more Cazadores Reposado.  If memory serves me correctly, around midnight, the bartender politely announced, “El Cierre de la barra.”  Loosely translated, “The bar is closing.”  That was a great first 9 hours in Mexico! 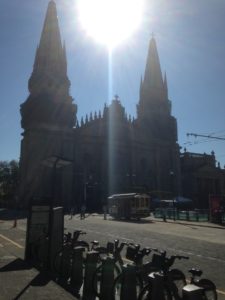 The next day was a sight-seeing day in Guadalajara where we saw many religious, cultural and historic buildings.  The first was the Guadalajara Cathedral.  Originally built in the mid 1500’s it has been reconstructed several times due to damage from a fire and many earthquakes.  The stained-glass windows, paintings, statues and other religious relics were breathtaking, as were the acoustics in the 450 year old structure.  It was a very moving experience for all of us on our tour.

A few blocks away we saw the Teatro Degollado, a 150 year old theater where symphonies, operas, ballets and cultural dance performances still occur.  This is another beautiful building. 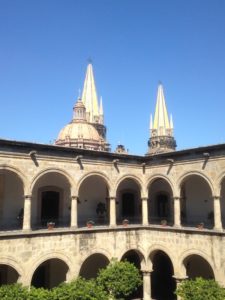 We also visited Hospicio Cabanas and the Government Palace where several murals painted by Mexico’s most renowned artist, Jose Clemente Orozco, adorn the walls and ceilings.  Orozco painted many political murals from 1922 until his death in 1949 in Mexico and the United States, including several at Dartmouth University.  His works are very dark and deep with many hidden meanings that he never fully disclosed.  Check out some of his work on the internet. What makes his work even more amazing is that he did it all with only one hand.  A fireworks accident led to the amputation of his left arm.  The entire tour was a great experience. 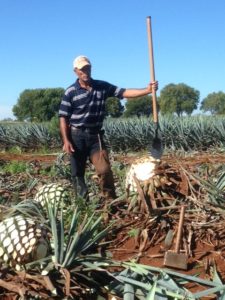 And now for the main reason for coming to Mexico!  The next morning we took a 2 hour ride in the Mercedes van to the town of Arandas in the Highlands of Central Mexico.  We drove through some beautiful scenery of the foothills where numerous cattle and goats were grazing in the distance.  And then we saw it, the unmistakable blue agave, planted in amazingly straight rows bursting through the unique red clay of the Highlands.  Our first stop was to visit some jimadors in these agave fields as they were harvesting.  Many people think that the agave is a type of cactus, but it is actually a member of the lily family.  The jimador uses a sharp-bladed, long-handled tool called a coa to remove the spikey, thorn-covered leaves, leaving a large root that resembles a pineapple on steroids.  These are called Pinas and can weigh upwards of 80 pounds.  They have a sugar content of about 25%.  These sugars will be boiled and then fermented into a liquid 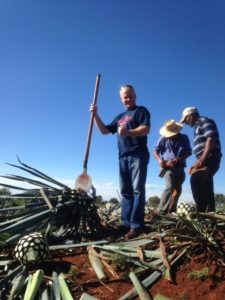 containing 5% alcohol.  This is sent through 2 distillations, the first 8 hours and the second 24 hours.  At this point the product is now tequila and is about 120 proof.  Reverse osmosis water is added to dilute it down to the most commonly desired proof of 80 or 40% alcohol.  It will then be bottled as a blanco or aged in oak barrels, a minimum of 2 months for Reposado or a minimum of a year for Anejo.

After a tour of the distillery, we went to the barrel aging room where we would do the blending of our very own tequila.  The smell of the room was incredible and quite intoxicating creating the perfect ambiance for our task ahead.  We were given 4 samples of tequila, each with its own distinctive 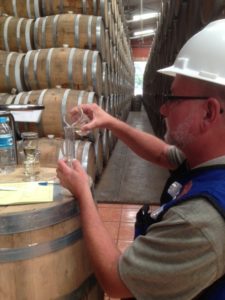 characteristics.  3 were Reposado and 1 was Anjeo.  We started with the standard Reposado and then added some with fruitier and spicier flavors and finished if off with a touch of Anejo to give it some added depth and complexity.  Our first effort was very good, but we thought a little too aggressive.  Our second turned out a little more mild than we wanted it, but still a very smooth blend.  Our third was exactly what we wanted.  We appropriately called it, “Tres Try.”  The Master Blender for Cazadores, Jesus Susunago, gave it 2 thumbs up.  Tania liked it so much that she started speaking Spanish, but not on purpose. 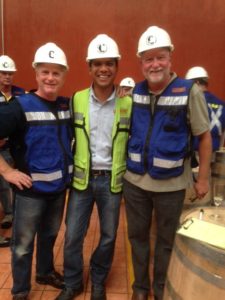 Our job was complete.  They will now bottle our masterpiece exclusively for the Otto’s Wine and Spirits chain.  It should be arriving by the end of November.  Stop in and buy a bottle when it comes in and let us know how we did.  We made it to be a very sippable style, but also a great tequila to make a Paloma or Margarita.  I would like to thank our driver who got us everywhere safely, the Cazadores Distillery for making this trip possible and especially Tania who was a wonderful host.  All in all it was a great 4 days, a trip I won’t forget for a long time and one I’m glad I was asked to be a part of. 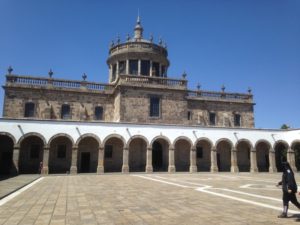 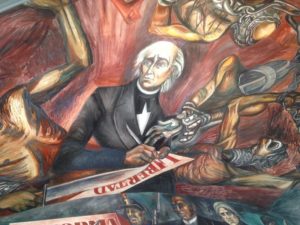 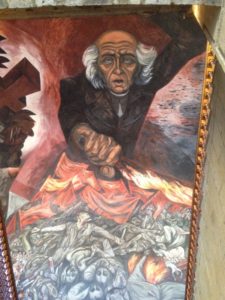