Welcome to the newest edition of Tim’s Blog.  As we transition from our 6 months of winter into our one month of spring, I have realized it is really nice to drive home from work before the sun sets.  More likely than not, our month of spring will be sprinkled in a day or two at a time in between 5 days of cold, blustery rain, or even worse, snow showers.  What would a Brewer’s Opening Day game be without snowflakes?  We can thank George Petak for getting us Miller Park, where it doesn’t matter what the weather is.  If the name doesn’t ring a bell, Google him.  The Brewers may have disappointed us on Opening Day, but the NCAA Championship Game did not.  Villanova and North Carolina put on a great display of what the Big Dance is all about, tough defense, great coaching, clutch shooting and all concluding with a basket at the buzzer to win the championship.  Congrats to the Wildcats!  I can hear some of you asking yourselves, “Is this a weather/sports blog, or what?”  Sorry, I’m easily distracted.  Ask any of my co-workers.  By the way, Carrie Underwood should have gotten “Best Female Performer” at the ACM Awards in Las Vegas.  Miranda Lambert?  Really?  (I told you that I was easily distracted) 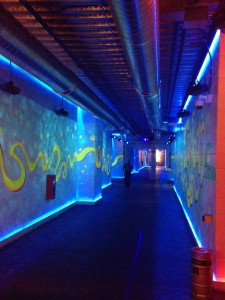 It had been a while since our last field trip, so Mary, our “Road Trip Coordinator”, set us up with a tour of the new Lagunitas Brewery in Chicago.  And what a trip it was!  About a dozen of us boarded a small coach bus at 8:30 a.m. with 3 dozen doughnuts and a cooler full of Lagunitas Pilsner and Little Sumpin, Sumpin.  It doesn’t get much better than this, doughnuts and great beer for breakfast.  We arrived at the brewery around 10:30, just a short distance from the United Center.  We entered into a long, neon painted corridor with music from the Willy Wonka movie playing.  It was bizarre, interesting and mildly creepy, all at the same time. This hallway led us to a large tasting room that had a small makeshift bar with 8 tap lines.  A huge mural of the Lagunitas dog covered one of the walls with “Lagunitas/Chicago” written across two other walls.  They had an odd variety of games to play, a dual race car video game, an old pinball machine that had only one working flipper and a large Jinga set.  They also had two saddles to sit on while you enjoyed a few samples.  I might have been seen on one or both of them.  Since we were in the tasting room, it was time to do some sampling.  The rare “Citrusinensis” was on tap so I obviously had to have a couple of them.  Only two ½ barrels were allocated to the tasting room and they were already into the second one.  We were very lucky to get a taste of this one.  This is an excellent wheat 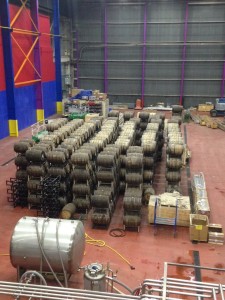 We were all properly primed for the tour.  Our guide was a young man known as “Mad Dog Miles”, an energetic guy with a gravelly voice and passion for Lagunitas.  He delivered his rhetoric with wit and humor, like a finely tuned comedian.  As we opened the door into the enormous 300,000 square feet facility, the first thing we see is their stockpile of beer being aged in 100’s of whiskey barrels from the Willet and High West Distilleries.  They will age to perfection until they reach a happy ABV around 12% before being kegged or bottled.  I hope to get my hands on some of these when they are released. 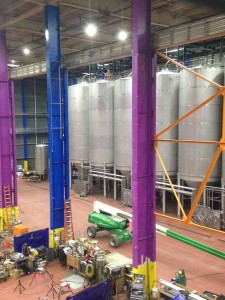 As previously mentioned, this is a huge place.  So huge, in fact, that the entire Soldier Field could fit inside of it.  With 60 fermentation tanks already, and room to add another 60, this is no rinky dink place.  It actually needs to be seen to be believed.  It’s hard to comprehend that a young home brewer who in 1992 had a boil over that ruined his wife’s stove which prompted her to forbid him from brewing in the house which caused him to apply for a commercial brewing license, has accomplished all of this.  Tony Magee, originally from Chicago, was living in California when all of this happened and in 1993 he opened his first brewery.  Quickly outgrowing that building, he opened the existing brewery in Petaluma in 1994.  In 2013 he leased a vacant steel mill and has turned it into a state of the art, beautiful brewery.  Simply amazing.

After our tour, we were treated to lunch at the restaurant inside the building, cheesy broccoli soup and a delicious barbeque pulled pork sandwich.  Both were excellent.  A trip to the gift shop was also on the itinerary.  After purchasing a few t-shirts and some very cool stone coasters, we were ready for the ride home.  I encourage all of you to take a road trip of your own and visit our friends at Lagunitas of Chicago.  Great beer, food and hospitality are a couple hours away.  Check their website for details.  FYI, Saturdays are extremely busy with an average of 1000 people touring. 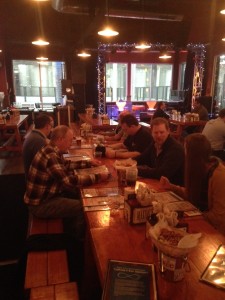 Otto’s Wine and Spirits is featuring Lagunitas for the entire month of April with a great price on 6 packs.  Stop in and see us and pick up some of these great beers.  And don’t forget to get all of your tailgating beverages while you are there, too!  See you soon.  Go Brewers!