Hello everyone, and welcome to Tim’s Blog.  Summer is finally here.  If you are like me, your calendars are rapidly filling up with graduations, weddings, neighborhood parties, grill outs, Brewer’s tailgates, family reunions and vacations.  It’s no wonder summer flies by.  As always, we thank you for shopping at your favorite Otto’s Wine and Spirits in preparation for these events.

Do you remember what you were doing 30 years ago?  I’m sure a few of you weren’t even born yet.  30 years ago, in June of 1986, Otto’s purchased the store once known as “The Wine Cask” at 4600 West Brown Deer Road.  It is hard to believe we have been there this long.  I was on the original crew in 1986 and I can say it has been a pleasure serving the Brown Deer and surrounding communities for these many years.  During this time, I have met many great customers and look forward to continue that for many more years to come.  Thanks for 30 great years! 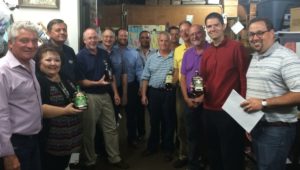 Last week we had Dan Tullio, the Master Ambassador of Canadian Whisky for Beam Suntory Brands, visit us.  He gave a presentation followed by a sampling.  Here are a few things that we learned.  In order for a whisky to be called a “Canadian Whisky” it must be mashed, distilled and aged in Canada.  The ageing must be a minimum of 3 years in wooden barrels no larger than 700 liters.  There are no restrictions on the type of barrel, whether new or used, or the amount of charring.  In Canada, Canadian Whisky is known as Rye.  This came about when distillers began adding small amounts of rye to their mashes.  Rye is a very flavorful, spicy grain that gives a whisky a distinct characteristic.  Rye is prominent in the provinces of Alberta and Saskatchewan since it thrives in arid and high altitude climates, but is very difficult to distill due to its small amounts of fermentable sugars.  Corn dominates the mash, but malted barley is also used.  There are no regulations on the percentages of grains used.

The Canadian Club Distillery was founded by Hiram Walker in 1858 in Detroit, Michigan.  He later moved it across the Detroit River into Windsor, Canada where it remains to this day.  Walker boasted about his premium whisky and touted the fact that he aged it a minimum of 5 years.  This was unheard of back then.  During the years of Prohibition, Al Capone became a very good “customer” and reportedly smuggled thousands of cases across the border.  Canadian Club was purchased by Beam Suntory in 2011 from Fortune Brands.

Now for the sampling.  Why not start with a 94.7% (that’s 189.4 proof if you are keeping score) double distilled corn distillate?  Made with 70% American grown corn, this stuff will burn the hair out of your nostrils.  Even though it had an aroma of rubbing alcohol, it had a distinct sweetness about it.  As I tasted it, I could feel it evaporating in my mouth.

Next was a 128 proof rye distillate.  This had a definite spicy, peppery characteristic, but was surprisingly smooth.  I guess, following the first one, this was a walk in the park.

We were then poured Old Overholt, an American Straight Rye Whiskey owned by Beam Suntory.  To be called a Straight Rye Whiskey in the United States, it must be a minimum of 51% rye aged in new oak barrels for at least 2 years.  This brand has been around since the early 1800’s and is the “Gold Standard” for American Rye Whiskey.

Canadian Club Classic 12 year old was our next sample.  A higher percentage of barley malt is used in this whisky and is aged in freshly emptied Jim Beam barrels.  This is an easy drinking whisky with notes of toffee and caramel followed by a hint of spice from the rye.  This would make a great Manhattan, but is definitely smooth enough to enjoy on ice.

Next we tasted Alberta Rye Dark Batch.  91% of this whisky is a blend of 12 year rye and 6 year pot distilled rye.  The remaining 9% is bourbon (8%) and Oloroso Sherry (1%) which add complexity and sweetness.  Dan enjoys this neat or with one ice cube. 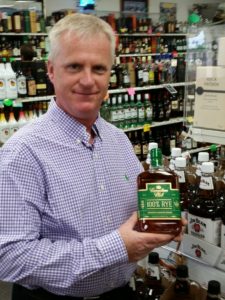 Lastly we were poured the newest offering from Canadian Club, “100% Rye.”  Quoting their website, “This is a whisky made for those who love rye.  It was created in the heart of Alberta’s unforgiving rye country, by a team who have spent the last 60 years mastering the art of distilling with rye.  This whisky is truly unique and deliciously distinct, with caramel and oak notes up front, followed by a spicy finish.  It’s so good, you’ll want to sip it neat. And so versatile, you’ll want to use it in all rye-forward classic cocktails.”  C.C. 100% Rye can be enjoyed in a Rye Old Fashioned or with hard cider, iced tea or cranberry juice.  Recipes are available at canadianclub.com.

If you find yourself in the Detroit area, cross the river into Windsor and take a tour of the Canadian Club Heritage Center.  This historical building has a Speakeasy room where Al Capone and other bootleggers met, an art gallery and, of course, a tasting room.  1½ hour tours are given daily.  See their website for details.

Could rye be the next big phenomenon in the liquor industry?  That remains to be seen, but with its versatility, mix ability and quality, it’s very possible.  If you have never tried a rye, now is the time.  Maybe you can be a trend setter.

Until next time, cheers.    Tim