It’s nearing the end of April and time for another installment of Tim’s Blog. Earlier this month, I had the pleasure to attend a “meet and greet” with one of the founders of Templeton Rye, Keith Kirkhoff. As you might imagine, when you “meet and greet” an owner of a rye whiskey company, a little tasting of his product goes along with it.

The history of Templeton is very interesting to say the least. Here is an abbreviated version. Templeton is a small town in West Central Iowa, population 362, founded in 1882 and is best known because of a certain beverage that was distilled there during Prohibition. That beverage was “Templeton Rye.” The recipe belonged to Alphonse Kerkhoff, Keith’s grandfather. When the 18th Amendment went into effect in 1920, some residents of this small Iowa town started producing his rye and bootlegging it to speakeasies in Chicago with the help of a “businessman” named Ralph Capone. It soon became the favorite whiskey of his brother, yes, the infamous Al Capone. He called it “The Good Stuff” and it is still known by that nickname today. After Al was arrested and jailed for tax evasion, legend has it that some bottles of “The Good Stuff” were smuggled into Alcatraz Prison to prisoner AZ-85.

When Prohibition was repealed on December 5th, 1933, Templeton Rye was produced for a period of time, still illegally, for those “in the know” around town. Then, in 2001, Meryl Kirkhoff (Keith’s father) formed a partnership with Scott Bush to bring Templeton Rye back, this time legally. Meryl had the original recipe, handwritten on a small piece of scrap paper. (like all classic recipes are)

They decided that they wanted to match the recipe precisely, but they found out if they did, the product would not fit within the federally regulated definition for rye whiskey. They kicked around the idea of calling it something other than a rye, but quickly came to the conclusion that this just wouldn’t be right. So they started looking for a distillery that could make a rye whiskey that would taste as close to Alphonse’s as possible. Quoting their website, “We found a high quality rye from Lawrenceburg Distillers of Indiana and sent samples of that rye, along with a bottle produced from Grandpa Kirkhoff’s recipe, to independent, third party experts at Clarendon Engineering in Louisville, Kentucky. These experts formulated, within Federal guidelines, to match the taste of the original Prohibition Era Kerkhoff recipe.” After sampling many versions, Meryl and Keith selected the one that best matched Grandpa Kerkhoff’s whiskey. 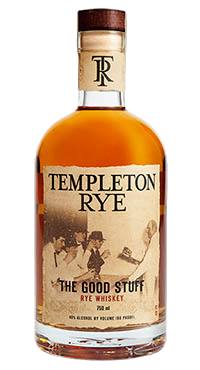 And so, in 2006, the rebirth of Templeton Whiskey came to fruition with 68 barrels of “The Good Stuff” being bottled, after 4 years of aging. The spirit was available, legally, for the first time!

Keith has been working
on plans for their very own distillery in Iowa. He hopes to be breaking ground in the very near future and possibly distilling in it by the end of this year. Templeton Rye will once again be made at its original home. We wish all the good folks of Templeton well in this huge endeavor. Visit the Templeton Rye websitefor more information.

Otto’s Wine and Spirits is featuring Templeton Rye at a very special price. Now is a great time to pick up a bottle or two. Enjoy it neat, on the rocks, with a splash of water or soda, or in a Manhattan, Sazerac or Old Fashioned. Or if you are watching a Brewer’s game, just drink it right out of the bottle. Whatever you decide, be sure to “Enjoy Inconspicuously.”(Another creative slogan of theirs) Stop by your favorite Otto’s and ask for “The Good Stuff.” I’ll drink to that.